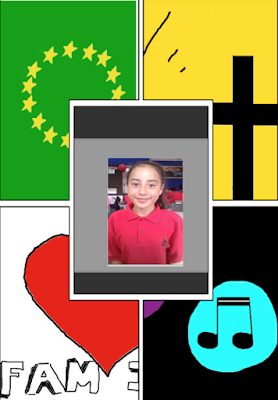 This is my Visual Mihi. This term we were given the task to do a Visual Mihi of yourself for your animation.

In the middle is me. I am there for people to see and know who I am.

On the top left hand corner there is a green flag with stars. That represents one of my cultures which is Cook Island.  There are 15 stars on the Cook Island flag. My other cultures are New Zealand, Maori and Tahitian.

On the top right hand corner there is a Cross. This is the Lords Cross. I have that there because I believe in the Lord. If you are good to the Lord the Lord is good to you.

On the bottom left hand there is a heart that has the word Family in it. I put that there because I Love my family dearly and always will. In my family I have 4 brothers that I love. I am the only girl in my family too.

I hope you learnt a bit about me. Hope you ENJOY!!!

WALT: Use the 'part unknown' strategy to compare amounts.

This is my maths problem solving for week 8. We were given 3 questions to answer plus our practice work at the end
Posted by Venetia at 12:30 No comments:

This is my problem Solving from Wk 7. We were given questions to answer.

MATHS
Posted by Venetia at 14:25 No comments:


Marcus is a little boy. He is 7 years old and is having a very hard time. Marcus is short for his age so he gets a bit mocked. Marcus has blonde hair like his father. Marcus goes to a small school located in Christchurch.


Marcus has never had a real friend. Marcus tried so hard to have that one friend. All he ever got was rejected. Marcus has always been an isolated child. If you try to talk to him he will stay quite. One day Marcus tried to find that one perfect friend but got rejected.
Walking as slow as a turtle Marcus approached the person he wanted to be friends with. With a softly spoken voice Marcus muttered ¨come play with me, I'm your bestfriend¨. As soon as he said that last word the person instantly screamed out ¨NO¨.


Marcus got so offended that he started to scream his head off. Throwing his arms in the air Marcus growled as loud as a lion. Stomping like an elephant Marcus stormed out of the classroom where he was to chill out.


Marcus decided to go for a stroll to let out the anger. Marcus was so full of anger that he walked as fast as a cheetah. With his bitter face on you could tell he was down.  As he calmed down he thought about friends. What are friends, he said to himself. Once he was calm he went back into his class.

Return Of The Moa

These few weeks we have been learning about New Zealands largest native bird the Moa. In our presentation we were given questions. The answers of those questions were in the text. Did you know that I know of 7 different Moa. They are:Bush Moa, Coastal Moa, Crested Moa, Eastern Moa, Giant Moa, Heavy-footed Moa and the Upland Moa.
Posted by Venetia at 10:57 No comments:

WALT:Learn about Aotearoa around the time of the Treaty of Waitangi. Make inferences


This is my reading task from weeks 2-3. We were given the text and questions. We then had to answer those questions. All of the answers were in the text.
Posted by Venetia at 16:40 No comments:

WALT:Solve whole unknown problems using
Task Description:Our task was to do a presentation of our working out. We were given maths questions to answer and work out. i did these questions with my partner Lucy. Here is our work
Posted by Venetia at 12:28 No comments:

Kia Orana. I am from the Islands of Rarotonga and New Zealand. I have 3 brothers. My favourite sports are Cricket, Netball and Dodge Ball. My hobbies are listening to music and playing sport. The subjects I like are Math and Writing. I hope you enjoy following my blog.

Who is visiting this blog?